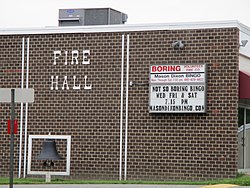 Boring is an unincorporated community in Baltimore County, Maryland, at the intersection of Old Hanover Road and Pleasant Grove Road, about 5 miles (8 km) north of Reisterstown. An important stop on the Western Maryland Railroad, it is very small, consisting of about 40 houses, the Boring Methodist Church, Boring Volunteer Fire Company (organized in 1907,) and the Boring Post Office.

The village of Boring could have avoided all of the jokes if they had just stuck with the town’s original name—Fairview. But there are a lot of other Fairviews in the U.S., so when a post office was established in the village in 1880, the postal service requested a rename. Residents voted to honor their first postmaster, David J. Boring—and he surely thought the recognition was anything but.

Aside from its name, Boring is well known for its annual Boring Gas Engine Show and Flea Market, held in June by the Boring Volunteer Fire Department. Old tractors, gas engines and steam engines, which served Maryland's farming communities in the early 20th century, are exhibited during the show.