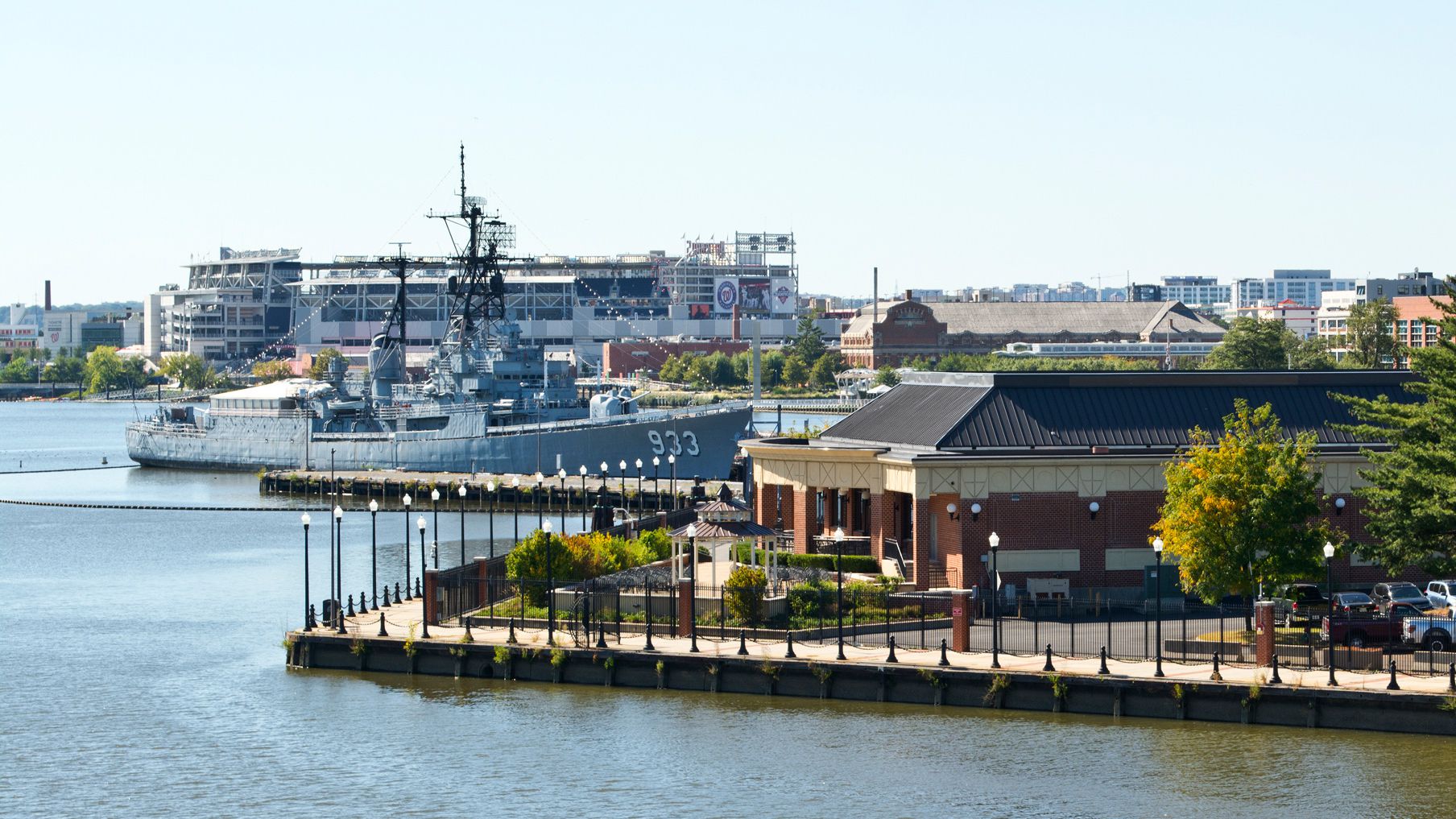 Southeast DC is the area south of East Capitol Street, and east of South Capitol Street (think of the Capitol Building as the center point of a compass). It continues beyond the Anacostia River and includes the area known as “East of the River.” Southeast has a rich African American history and vibrant culture and has undergone significant revitalization over the past few decades.

After World War II, the Navy Yard scaled back operations and the commercial heart of the District moved downtown. Abandoned warehouses and divestment in the community, not to mention a once heavily polluted river, left the area ripe for crime and neglect. As with any urban city, you’ll find pockets of crime and areas with bad reputations, but we encourage you to look past that. There are many new highrise buildings near the water and the Capitol Hill neighborhood has quaint, treelined streets with pricey rowhomes and local shops on every corner.

The construction of Nationals Park in 2008, home to the Washington Nationals professional baseball team, has helped the area tremendously by attracting restaurants, grocers, parks, and public-use amenities to the Southeast Riverfront.  Two fantastic parks, the Yards Park and Capitol Park, are right on the river and constantly abuzz with activity. The Eastern Market is a very popular food and arts market in the Capitol Hill neighborhood, and lies only a mile north of the Navy Yard.

Southeast is home to people of all ages. Young working couples and singles gravitate here for the affordable apartments, townhomes, and English basements (lowest floor of a townhouse or brownstone). It is also an eclectic and diverse community that has embraced a number of different immigrant groups with rich cultures. Most of the area is walkable and the residents tend to be very active.

Close to the Riverfront, you’ll see highrise apartment buildings with new restaurants, parks and community spaces to enjoy. As you go farther north into Capitol Hill, the homes get pricier, and the neighborhoods become more affluent. Young families gravitate near the Eastern Market for walkable restaurants, parks, and shopping; and they love the quieter pace and lack of raucous nightlife. As with any urban city, you’ll find pockets of crime so we encourage you to do your research before renting or buying in Southeast DC.

SE Washington DC has a mixed population with politicians and government employees, journalists, professionals, and students residing in the Capitol Hill neighborhood and a lower-income predominantly African American population living in the neighborhoods south of the Anacostia River. The area is undergoing a massive transformation and is one of the city’s fastest-growing in terms of employment, entertainment and residential growth. This map shows the boundaries of SE Washington, DC. Zip codes in SE include 20003, 20374, 20032, 20020, and 20019.

Capitol Hill - The most prestigious neighborhood in the nation's capital is home to Congressional offices, the Supreme Court, and numerous city parks. It is the largest district of historic homes in Washington DC.

Anacostia - The historic district along the river is listed on the National Register of Historic Places. It was home to the human rights leader Frederick Douglass.

Barry Farm - The SE DC neighborhood was renowned as a significant post-Civil-War settlement of free Blacks and freed slaves. The neighborhood was originally part of James Barry’s farm, which extended from the Anacostia River to what is now known as Garfield Heights. It now contains 432 units of public housing that is managed by the DC Housing Authority.

Southeast is home to a gorgeous riverfront, abundant public spaces and parks with a young vibe and active culture.

Transit options are many with the Navy Yard Metro station, bus service, and the Circulator bus to connect to Union Station and Capitol Hill. There’s even a water taxi!

Schools in Southeast Washington D.C. Are a part of the District of Columbia Public Schools system, which has an overall rating of 5, according to GreatSchools.com. You have the option of enrolling your children in any school that they aren’t already zoned to in the District of Columbia Public School system through the DCPS one-stop shop lottery system.Lotteries are available for preschool programs (3 and 4 year olds), out-of-boundary schools K-12 (those outside your zone), selective high schools, and charter schools.

The southern sectors of Washington do not have as many tourist attractions as the rest of the city, but that doesn’t mean there’s no reason to visit. These areas are old residential and industrial sections which still contain ties to that history. The dividing line between the north and south areas of the District is East Capitol Street and the west and east areas are separated by South Capitol Street. While the Southwest and Southeast are serviced by the Green, Blue, Orange, and Silver Metro lines, some of the locations listed below are not within easy walking distance of stations. The good news is that their remoteness means that parking is often available for self-drivers.

East Potomac Park is the peninsula that separates the Potomac River from the Washington Channel and its point – called Hains Point – marks the end of the Anacostia River as it flows into the Potomac. This 1 ½ mile long sliver of land is home to the East Potomac Golf Course, a miniature golf course, and a long, cherry tree-lined path with river views. The park is pleasantly quiet and connects via trail to the Tidal Basin, but it is sadly in an underwhelming state with bald spots in the grass and holes in the pathways.

Across the Washington Channel is an area that is receiving lots of attention and will continue to do so for a few more years. Called “The Wharf,” it is planned to be a mixed-use space with commercial offices, retail stores, dining, and entertainment areas adjacent to the marina in the channel. Unfortunately, phase one of the project is not set to be completed until late-2017.

South of the marina – at the intersection of P St SW and the Washington Channel – is the surprising Women’s Titanic Memorial. We call it surprising for two reasons: for one, most wouldn’t expect to find a memorial to the ill-fated ocean liner in Washington, D.C. It is dedicated to the men who died so that women and children could have their spots on the lifeboats and was commissioned by the “Women of America.” The second surprising thing? The statue depicts a woman in a pose shockingly similar to that struck at the bow of the ship in the famous Titanic film, despite the statue being erected in 1931.

Directly adjacent to the Titanic Memorial on P Street is Fort McNair, the nation’s 3rd oldest Army post. Much has changed since its opening in 1791, but parts of Grant Hall have recently been restored – specifically a courtroom on the 3rd floor, which was the site of the 1865 trials of the Lincoln assassination conspirators. They were later hung in the yard outside. At the southern tip of the fort is Greenleaf Point and Roosevelt Hall, the former War College. Visitors to Fort McNair must present government-issued identification and submit to basic questioning such as place of residence and reason for visiting. Both Fort McNair and the Titanic Memorial are about a ½ mile from the Waterfront Metro station (Green), although the southern end of Fort McNair is a further ¾ mile.

Moving over to Southeast D.C., 1500 S Capitol St SE is where you will find Nationals Park, the home of Major League Baseball’s Washington Nationals. Opened in 2008 and built specifically for the Nationals, the Washington Monument and U.S. Capitol dome can be seen from the upper decks on the first base side. For tickets to a baseball game, check their website at washington.nationals.mlb.com – the season traditionally runs from April into October with the playoffs following that. Start making plans now to attend the 2018 MLB All-Star Game, which has been awarded to Nationals Park.

A few minutes of walking east along a boardwalk on the Anacostia River brings you to the Navy Yard, which was established in 1799. A former shipyard and ordinance manufacturing facility, it is now home to the Chief of Naval Operations, Naval Sea Systems Command, and many other integral Navy functions. Several naval advances including pre-Civil War nautical cannons and shipboard airplane catapults were designed and tested here. The National Museum of the US Navy – located in a former Naval gun factory – contains displays on the history and important events of the Navy and is open daily from 9:00 am to 5:00 pm.

A few blocks northeast of the Stadium-Armory Metro station is Robert F. Kennedy Memorial Stadium, commonly called RFK. It has been in use since 1961 and used to be where the National Football League’s Washington Redskins played (until they moved to suburban Maryland in 1997). RFK has hosted college football bowl games, FIFA World Cup matches, and the January 12, 1992 NFC Championship game, won by the Redskins before going on to win the Super Bowl. Today RFK is the home of Major League Soccer’s DC United, although a soccer-specific stadium is being planned near Nationals Park. The American soccer season runs from March through October.

If you are thinking to start a business in S.E., DC (SouthEast) you should consider First Down Funding.