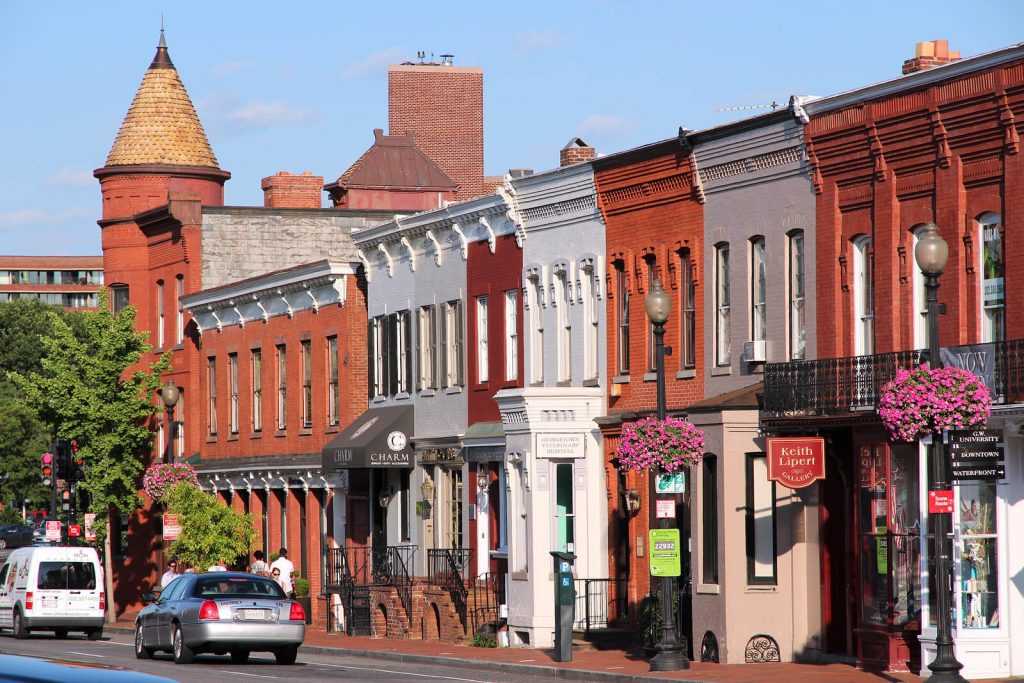 Georgetown is a historic neighborhood and a commercial and entertainment district located in northwest Washington, D.C., situated along the Potomac River. Founded in 1751 in the Province of Maryland, the port of Georgetown predated the establishment of the federal district and the City of Washington by 40 years. Georgetown remained a separate municipality until 1871 when the United States Congress created a new consolidated government for the whole District of Columbia. A separate act passed in 1895 specifically repealed Georgetown's remaining local ordinances and renamed Georgetown's streets to conform with those in the City of Washington.

The District of Columbia Public Library operates the Georgetown Neighborhood Library, which originally opened at 3260 R St. NW in October 1935 on the site of the former Georgetown Reservoir. An earlier public library in Georgetown was endowed by financier George Peabody in 1867 and opened in a room of the Curtis School on O Street opposite St. John's Church in 1875. In the early 1930s, a library committee was formed to encourage the establishment of a new public library branch in Georgetown.

The building was severely damaged by a fire on April 30, 2007, and underwent a $17.9 million renovation and expansion. The building was re-opened on October 18, 2010, with a LEED-Silver Certification from the U.S. Green Building Council. A newly constructed, climate-controlled third floor now houses the collections of the original Peabody Library and is a center for research on Georgetown history.

The primary commercial corridors of Georgetown are the intersection of Wisconsin Avenue and M Street, which contain high-end shops, bars, restaurants, and the Georgetown Park enclosed shopping mall. The Washington Harbour waterfront restaurants are located at K Street, between 30th and 31st Streets.

Georgetown is home to the main campus of Georgetown University and numerous other landmarks, such as the Volta Bureau and the Old Stone House, the oldest house in Washington. The embassies of Cameroon, France, Iceland, Liechtenstein, Mongolia, Sweden,Thailand, Ukraine and Venezuela are located in Georgetown.

Georgetown is bounded by the Potomac River on the south, Rock Creek to the east, Burleith, Glover Park, and Observatory Circle to the north, with Georgetown University on the west end of the neighborhood. Much of Georgetown is surrounded by parkland and green space that serve as buffers from development in adjacent neighborhoods, and provide recreation. Rock Creek Park, the Oak Hill Cemetery, Montrose Park and Dumbarton Oaks are located along the north and east edge of Georgetown, east of Wisconsin Avenue. The neighborhood is situated on bluffs overlooking the Potomac River. As a result, there are some rather steep grades on streets running north–south. The famous "Exorcist steps" connecting M Street to Prospect Street were necessitated by the hilly terrain of the neighborhood.

The primary commercial corridors of Georgetown are M Street and Wisconsin Avenue, whose high fashion stores draw large numbers of tourists as well as local shoppers year-round. There is also the Washington Harbour complex on K Street, on the waterfront, featuring outdoor bars and restaurants popular for viewing boat races. Between M and K Streets runs the historic Chesapeake and Ohio Canal, today plied only by tour boats; adjacent trails are popular with joggers or strollers.

Georgetown is an origination point for the historic C&O Canal, a National Park which runs 184.5 miles into Cumberland, MD. When ground broke in 1828, the Canal brought to life George Washington’s vision to open up the country to the west—connecting the port town to goods and materials that supported a local industrial economy unique to the region. Today, the Canal Towpath is a popular spot for runners and cyclists, and provides an urban oasis unlike anything else in the city. Georgetown’s one-mile section of the C&O Canal is currently undergoing a multi-year revitalization and reactivation, led by Georgetown Heritage and the National Park Service, with support from the Georgetown BID and DC Office of Planning.

African Americans have lived, worked, and worshipped in Georgetown since its founding—making up 30% to 40% of the residential population at one time. Discriminatory public housing policies such as The Alley Dwelling Elimination Act and The Old Georgetown Act, as well as gentrification—before the latter had a name—largely pushed out much of the community from the 1930s to 1950s, but their history remains.

Follow the African American Heritage Trail to see the institutions and homes of Herring Hill, a 15-block area of eastern-most Georgetown that was a home for families migrating to Washington after the Civil War. Other points of interest include the site of freed slave and Georgetown resident Yarrow Mamout’s home, the Mount Zion / Female Union Band Society Cemetery, and the Rose Park tennis courts—dedicated to the star Peters sisters.

Georgetown is renowned for federalist architecture, historic brick and frame row houses, cobblestone streets, and grand estates dating back as early as the mid-1700s. Visit these historic places, many of which offer guided tours.

A Georgetown landmark for nearly two centuries, the Federal period house showcases household furnishings, art, and décor from the early years of the republic.

Built in 1801, the Federal-style house features the former owners’ Byzantine and Pre-Columbian art collections. Former U.S. Vice President John C. Calhoun once lived there, and the United Nations charter was outlined there in 1944. The property contains 10-acres of trees, including Washington’s famed cherry blossoms, as well as flowers and ornamental garden fixtures.

The oldest standing building in Washington, established in 1765, is an example of vernacular architecture. It was built using locally available resources and renovated by the National Park Service in the 1950s.

The Peabody Room of the Georgetown Public Library

The Peabody Room is a special collection of Georgetown neighborhood history, with Special Collections Librarian and Archivist Jerry McCoy at the helm. In many ways a virtual tour of Georgetown, it includes photographs, maps, neighborhood microfilmed newspapers, paintings, engravings and artifacts that document various aspects of Georgetown life–plus a house history file for nearly every home in Georgetown.

This Federal-style home was built beginning in 1787 by the first Secretary of the Navy, Benjamin Stoddert. Its gardens were designed by Pierre L’Enfant, and in the early 19th century, Halcyon House was the center of much of DC’s social life. After a succession of owners, it was sold to Albert Clemens, a nephew of Mark Twain, in 1900. Georgetown University bought the property in 1961 and used it as a dorm. Now on the National Register of Historic Places, the house serves as the headquarters for Halcyon, a non-profit with a mission to catalyze emerging creatives striving for a better world.

Georgetown is home to world-renowned Georgetown University—the oldest Catholic and Jesuit university in the country that dates back to 1789—a 15-minute walk to The George Washington University, bringing a combined student population of more than 45,000 to the area.

To learn more about Georgetown history, visit the Georgetown Library’s Peabody Room, which houses historical and current materials related to the history, culture and economy of Georgetown.

Georgetown in the 1850s had a large African-American population, including both slaves and free blacks. Slave labor was widely used in construction of new buildings in Washington, in addition, to provide labor on tobacco plantations in Maryland and Virginia. Slave trading in Georgetown began in 1760 when John Beattie established his business on O Street and conducted business at other locations around Wisconsin Avenue. Other slave markets ("pens") were located in Georgetown, including one at McCandless' Tavern near M Street and Wisconsin Avenue.  Slave trading continued until 1850, when it was banned in the District as one element of the Compromise of 1850. Congress abolished ownership of slaves in the entire District on April 16, 1862, annually observed today as Emancipation Day. Many African Americans moved to Georgetown following the Civil War, establishing a thriving community.

In the late 18th century and 19th century, African Americans comprised a substantial portion of Georgetown's population. The 1800 census reported the population in Georgetown at 5,120, which included 1,449 slaves and 227 free blacks. A testament to the African-American history that remains today is the Mount Zion United Methodist Church, which is the oldest African-American congregation in Washington. Prior to establishing the church, free blacks and slaves went to the Dumbarton Methodist Church where they were restricted to a hot, overcrowded balcony. The church was originally located in a small brick meetinghouse on 27th Street, but it was destroyed by fire in the 1880s. The church was rebuilt on the present site.  Mount Zion Cemetery offered free burials for Washington's earlier African-American population. "From a pre-Civil War population of 6,798 whites, 1,358 free Negroes, and 577 slaves, Georgetown's population had grown to 17,300 but half these residents were poverty-stricken Negroes."

First Down Funding is one of the top funders in the area.