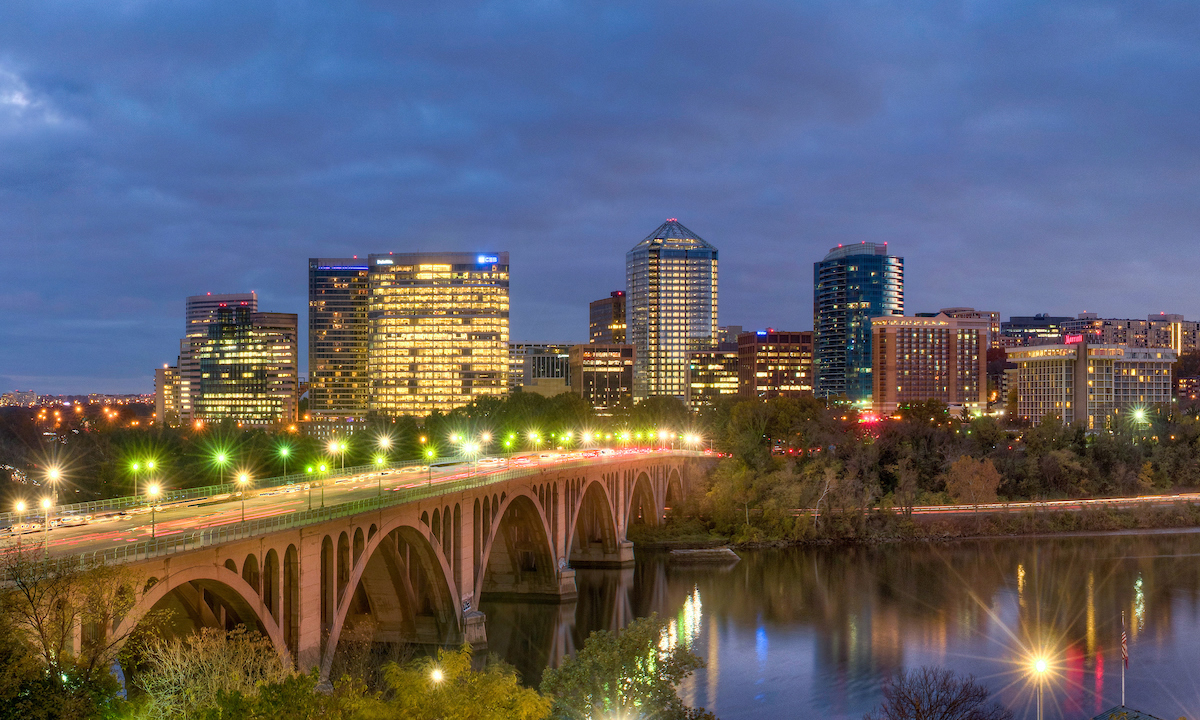 Arlington sits directly across the Potomac River from Washington, D.C., in the Northern Virginia region. It is the site for the famous Arlington National Cemetery, established as an American military cemetery during the Civil War. The cemetery sits on the grounds of Confederate Gen. Robert E. Lee's home, Arlington House, and veterans from all the nation's wars are buried in the cemetery, from the American Revolution through The War on Terrorism in Iraq. President John F. Kennedy's grave is there, too, marked with the Eternal Flame. Other monuments include The Tomb of the Unknowns and the Iwo Jima Memorial.

Arlington also is home to The Pentagon, the HQ for the U.S. Department of Defense.

Bikers can enjoy the 23-mile self-guided tour of Arlington with 12 stops to learn history along the way. A great place to hike and bike is the W & O.D. Railroad Trail that traverses the urban heartland and countryside of Northern Virginia.

Arlington, Virginia was once part of the national's capital when it was founded in 1790. You can still see some of the 200-year-old “boundary stone” markers showing Arlington was once part of the original Federal City designed by Pierre L'Enfant. This connection to the nation's capital remains today in our history, attractions and everyday life. You can find Civil War artifacts throughout the county.

Get a glimpse of how the middle class used to live during Virginia’s Colonial era at the Ball-Sellers House Museum. Built in the 1740s, the house is the oldest structure in Arlington and portrays the lives of its historic residents like farmer John Ball and his family. You will also hear about William Carlin, a tailor for President George Washington, who also lived in the house back then.

Learn how Union soldiers protected Washington, D.C. during the Civil War at Fort C.F. Smith, which was constructed by Union Troops in early 1863. You can see the ruins of fort in the 19-acre park, which also includes a restored 20th century mansion (available for weddings and meetings), a forest, meadow, and gardens.

Check out the Arlington Historical Museum where you will find model of a local Native American village, local Civil War artifacts, Arlington's first television (a Dumont!), and artifacts from the Pentagon.

Arlington National Cemetery is an American military cemetery established during the American Civil War on the grounds of ConfederateGeneral Robert E. Lee's home, Arlington House (also known as the Custis-Lee Mansion). It is directly across the Potomac River from Washington, D.C., north of the Pentagon. With nearly 300,000 graves, Arlington National Cemetery is the second-largest national cemetery in the United States.

Arlington House was named after the Custis family's homestead on Virginia's Eastern Shore. It is associated with the families of Washington, Custis, and Lee. Begun in 1802 and completed in 1817, it was built by George Washington Parke Custis. After his father died, young Custis was raised by his grandmother and her second husband, the first US President George Washington, at Mount Vernon. Custis, a far-sighted agricultural pioneer, painter, playwright, and orator, was interested in perpetuating the memory and principles of George Washington. His house became a "treasury" of Washington heirlooms.

In 1804, Custis married Mary Lee Fitzhugh. Their only child to survive infancy was Mary Anna Randolph Custis, born in 1808. Young Robert E. Lee, whose mother was a cousin of Mrs. Custis, frequently visited Arlington. Two years after graduating from West Point, Lieutenant Lee married Mary Custis at Arlington on June 30, 1831. For 30 years, Arlington House was home to the Lees. They spent much of their married life traveling between U.S. Army duty stations and Arlington, where six of their seven children were born. They shared this home with Mary's parents, the Custis family.

The U.S. government confiscated Arlington House and 200 acres (81 ha) of ground immediately from the wife of General Robert E. Lee during the Civil War. The government designated the grounds as a military cemetery on June 15, 1864, by Secretary of War Edwin M. Stanton. In 1882, after many years in the lower courts, the matter of the ownership of Arlington National Cemetery was brought before the United States Supreme Court. The Court decided that the property rightfully belonged to the Lee family. The United States Congress then appropriated the sum of $150,000 for the purchase of the property from the Lee family.

Veterans from all the nation's wars are buried in the cemetery, from the American Revolution through the military actions in Afghanistanand Iraq. Pre-Civil War dead were re-interred after 1900.

The Tomb of the Unknowns, also known as the Tomb of the Unknown Soldier, stands atop a hill overlooking Washington, DC. President John F. Kennedy is buried in Arlington National Cemetery with his wife Jacqueline Kennedy Onassis and some of their children. His grave is marked with an "Eternal Flame." His brothers, Senators Robert F. Kennedy and Edward M. Kennedy, are also buried nearby. William Howard Taft, who was also a Chief Justice of the U.S. Supreme Court, is the only other President buried at Arlington.

Other frequently visited sites near the cemetery are the U.S. Marine Corps War Memorial, commonly known as the "Iwo Jima Memorial", the U.S. Air Force Memorial, the Women in Military Service for America Memorial, the Netherlands Carillon and the U.S. Army's Fort Myer.

The Pentagon in Arlington is the headquarters of the United States Department of Defense. It was dedicated on January 15, 1943 and it is the world's largest office building. Although it is located in Arlington, the United States Postal Service requires that "Washington, D.C." be used as the place name in mail addressed to the six ZIP codes assigned to The Pentagon.

The building is pentagon-shaped and houses about 23,000 military and civilian employees and about 3,000 non-defense support personnel. It has five floors and each floor has five ring corridors. The Pentagon's principal law enforcement arm is the United States Pentagon Police, the agency that protects the Pentagon and various other DoD jurisdictions throughout the National Capital Region.

Built during the early years of World War II, it is still thought of as one of the most efficient office buildings in the world. It has 17.5 mi (28.2 km) of corridors, yet it takes only seven minutes or so to walk between any two points in the building.

It was built from 680,000 short tons (620,000 t) of sand and gravel dredged from the nearby Potomac River that were processed into 435,000 cubic yards (330,000 m³) of concrete and molded into the pentagon shape. Very little steel was used in its design due to the needs of the war effort.

The open-air central plaza in the Pentagon is the world's largest "no-salute, no-cover" area (where U.S. servicemembers need not wear hats nor salute). The snack bar in the center is informally known as the Ground Zero Cafe, a nickname originating during the Cold Warwhen the Pentagon was targeted by Soviet nuclear missiles.

During World War II, the earliest portion of the Henry G. Shirley Memorial Highway was built in Arlington in conjunction with the parking and traffic plan for the Pentagon. This early freeway, opened in 1943 and completed to Woodbridge, Virginia in 1952, is now part of Interstate 395.

Arlington has consistently had the lowest unemployment rate of any jurisdiction in Virginia.  The unemployment rate in Arlington was 4.2% in August 2009.  60% of office space in the Rosslyn-Ballston corridor is leased to government agencies and government contractors.  There were an estimated 205,300 jobs in the county in 2008. About 28.7% of these were with the federal, state or local government; 19.1% technical and professional; 28.9% accommodation, food and other services.

Arlington ranks fourth in the nation, immediately after Washington, D.C. itself, for park access and quality in the 2018 ParkScore ranking of the top 100 park systems across the United States, according to the ranking methodologies of the nonpartisan Trust for Public Land

First Down Funding is one of the top funders in Arlington.