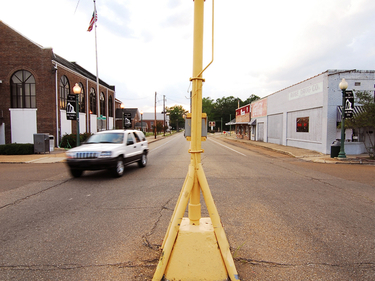 Smackover is a small city in northern Union County, Arkansas, United States. According to Citydata.com, the 2014 population was at 1,790. It had a large oil boom in the 1920s, with production continuing for some time.

This town of 1800 people in southern Arkansas, at one point one of the nation’s biggest oil producers, was settled by French trappers in the early 19th century. The name Smackover may have come from the French name for the local creek, Chemin Couvert, which means "covered way"—and "sumac couvert" means a covering of sumac trees, a local plant. Alternate theories trace the name back to the legend of oil streaming "smack over the derrick" or a settler jumping "smack over the creek," according to the state’s website.

Today, Smackover has settled down dramatically, but the oil boom lives on in its original architecture, down home working values and its innovative and creative people. Although the shadows of a mineral boom still linger, Smackover has been transformed into a modern city of substance. The petroleum industry still plays a major role in Smackover's economic outlook, with oil still being produced in tidy amounts

The first post office was established in 1890 and the town was incorporated September 30, 1922. Today there are 1865 citizens in the city of Smackover. The town has run the gambit from trading post to farming to lumber and now oil. Smackover is a family oriented town that still believes in commumity and family values.